Alpine environment is the victim of climatic and land use changes. The effect of climate warming in high-mountain to nival belts is particularly important and Alpine plants have to adapt to these new conditions. In this context of global change, studying the spatial and temporal evolution of Alpine rare plants will help to predict the evolution of their populations and the characteristics of the future Alpine communities.

Climatic change impacts Alpine species and it presents as modifications of regeneration processes (e.g. the life cycle from germination to seeds dissemination) among several species. Previous studies have shown that rapid evolution can occur in 30 generations and even less, and that there is a common trend for plants to move to an earlier germination in the context of global change.

In this project, we study the effect of global warming on the sexual regeneration processes of several annual Alpine plants, in order to detect eventual common evolution patterns between species. Annual species are a rare life form in alpine to nival belts (they represent 12 to 3.9 % of the biologic types in these belts). They are a good model to study rapid evolution because of the short duration of their life cycle.

This study is based on a resurrection approach on six spatiotemporal populations of Trifolium saxatile: three spatial populations in the French Alps and two temporal populations per site (1990’s and 2016). Seeds of these six populations were sown and cultivated in common environment, either in growth chamber for laboratory tests (mycorhization intensity, bacteria symbiosis, and several phenotypic traits like root length), or in common garden for phenotypic measures (germination and flowering date, annual or biannual biological type…). 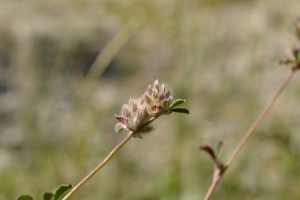 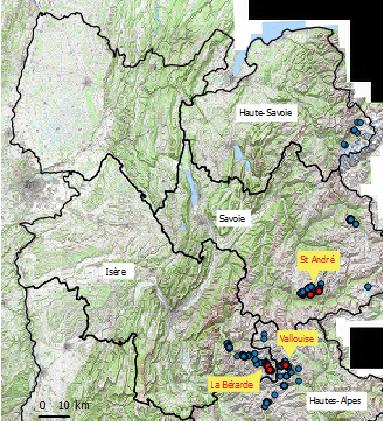 Location of Trifolium saxatile in the French Alps (blue points) and of the studied populations (red points and yellow labels). French departments where T. saxatile is present are indicated with white labels.